skip to main | skip to sidebar

4:06pm: Afro Ride by Leftfield from The Afro-Left EP

4:16pm: My C-Lab Crashed and Did This by Shut Up and Dance from Death is Not the End

4:27pm: Godess by SoHo from Godess

4:34pm: Filthy by St. Etienne from Only Love Can Break Your Heart

4:43pm: We are Hardcore by The House Crew from Bass, Breaks & Bleeps Volume 4

4:55pm: Span Soundwave by The Shaman from Pro-Gen

5:57pm: Meet Every Situation Head On by Psychic TV from Jack the Tab
Posted by Tristes Tropiques at 11:21 AM 1 comment:

Maybe You'll Have a Conversion Experience

A new track from Bruse, a techno-industrial-dub-house-ambient project from Josh Widmann and Nihar Bhatt. Guaranteed to elevate your consciousness to levels unreached with mindbending ambient house rhythms which unify sonic environments.


Posted by Tristes Tropiques at 1:36 PM No comments:

New short mix of recently acquired early and mid 1990s tunes spanning early output of Aphex Twin and Paul Van Dyk to lesser known dance floor movers from that era including 39 Orbits, Direct 2 Disc, The Overlords, and D:Ream. A bit of early sounding trance elements but overall the mix is mainly the lusher, layered, and atmospheric side of prog house.

New Tristes Tropiques tune is out - Without a Cure

Finally got around to putting an all new original Tristes Tropiques track together for 2012. Give a listen if you are into the pataphysical or dreamscape disintegration.

Dim the lights and steak-out this smoove mix

Another heavy hitting dj mix from Philadelphia, this time, going smooth and deep. Highly recommended and all vinyl!

For Ruxbin's Mixedtape Exchange this year, I thought I'd make some sense of some of my vintage house 12"s. I included a couple recent cuts, but the majority of the soaring synths & warm basslines are from late 80s to mid 90s. 100% vinyl, featuring tracks from Cajual, Nu Groove, Shelter, Henry Street, Planet E, TBD Sounds & more!

You can also grab it from mediafire: http://www.mediafire.com/?6a8qqzevzhob0ga

Posted by Tristes Tropiques at 11:48 AM No comments:

In preparation for February Haçeteria with Breath Control here's a new mix, starting things off with a big mid-90s hit from Alcatraz, "Giv Me Luv":

Haçeteria: A Monthly Acid House and Techno Party at the Deco Lounge 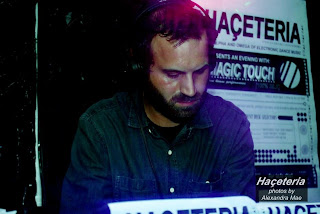 Haçeteria: A Monthly Acid House and Techno Party at the Deco Lounge

Haceteria is a monthly dance party that specializes in acid house and rare techno tracks at the Deco Lounge, right in the heart of the Tenderloin. With talented DJs, great ambiance, and a vast collection of records from the late 80’s and early 90’s, Haceteria has all of the necessary ingredients for fun.

Josh Widmann, one of the founders of this local gem of a party, opens up about the origins of Haceteria, what style of music influences him, and just how he got into the scene. Be sure to check out the party this Saturday, October 15th, when Haceteria presents Claud Levi and Roche.

How did you first get into DJing?

I first began DJing in college. Many of the dance tracks I wanted were coming out of the UK on vinyl and it looked fun to try to mix them together. I was getting more into electronic music as the 90s closed and I guess it seemed only natural that I started either playing this music or creating it. For most of the 2000s I focused on DJing, although I did take an electronic music production class in college.

Where are your favorite places to play and crowds to play for?

I used to DJ a happy hour called Radioactivity at 222 Hyde, which features a TurboSound system and a rotary mixer is a DJ’s delight. The recent American Tripps “Berlin style” ping pong parties the Haçeteria crew DJs at Secret Alley on Capp Street have been high energy and the new venue at Z Space should be just as good.

Can you describe your musical taste and how it has evolved?

My tastes have been turning more towards the 90s over the last year or so. I’ve recently been stocking up on lots of Guy Called Gerald tracks and songs from his labels. There are so many Strictly Rhythm records that are actually decent and can still be found for really cheap. I’ve also been listening to more harder American techno sounds like Frankie Bones and Ron Trent. Before this current phase I was listening to lots of Italo Disco and proto-house tracks from the early and mid-80s. Before that I was buying lots of quirky disco songs from the late 70s and early 80s as well as more danceable post punk and industrial tracks from that era. A lot of my current tastes are a rediscovery of songs I had heard about in the late 90s that were at the time known as ‘oldschool anthems’ from the late 80s and ‘breakbeat hardcore’ from the early 90s. When I first started getting into the electronic music, I appreciated songs like French Kiss, Voodoo Ray, and My House but was more interested in the contemporary harsher, faster, sample-heavy sound at the time like drum and bass and UK garage. A lot my current interests parallel the songs mentioned in Simon Reynold’s “Energy Flash” book about electronic music. Coincidentally, a lot of my post punk interests parallel tracks discussed in Reynold’s “Totally Wired” book.

Who are your favorite local DJs?

Chris Orr, Jason Kendig, Conor, and the other three most excellent Haçeteria DJs – Nihar B, Jason P, and Smac.

How did the concept of Haceteria come to be, and who helped get it off the ground?

My friend Nihar from the Warm Leatherette minimal synth party approached me last year with an open club night slot at the Deco lounge in the Tenderloin. We then attempted to come up with a name, look, and description of genres we’d play. I’ve wanted to start a club specializing in Haçienda type tracks for over ten years. Initially the club was going to showcase more Factory Records type of bands with danceable songs like New Order, Happy Mondays, Section 25, T-Coy, and Quando Quango. This is reflective in the early name and look of the club night. We then realized there are only so many times you can play “Looking from a Hilltop” or “Confusion” and branched out to mid-80s techno & house, Italo Disco, proto-rave, hip-house, and Belgian New Beat. After a cease and desist letter from New Order’s Peter Hook over our use of the club name Haçienda we decided to change the name to Haçeteria. We did this to overtly reference the old New York dance club Danceteria, hoping to let folks know that we are more of an anti-club, playing dance music for folks who probably typically go to live shows and appreciate a less polished, do-it-yourself musical aesthetic.

What type of DJs do you typically ask to play for Haceteria?

We usually ask folks who have a large collection of late 80s and early 90s dance music, especially Acid House and early techno. Since the spring of this year we’ve also been featuring live performances from bands and individuals who heavily use drum machines and synthesizers. This Saturday our live guest is Roche from Solos Records and opener Claude Lévi, who happens to be my live performance alter ego.

Check out some mixes from the talented DJs here:

My soundcloud with some original tracks: http://soundcloud.com/tristestropiques

Posted by Tristes Tropiques at 12:01 PM No comments: